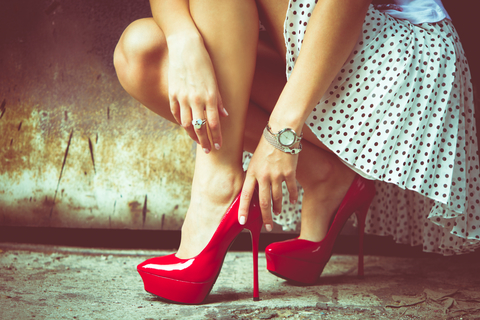 In Germany, if you try and wish someone a happy birthday before midnight of their big day, you will be met not with a friendly ‘Danke’, but a sombre ‘That’s bad luck’. And then when it is finally midnight and time to clink glasses in celebration of a birthday, you might notice some intense eye contact: Germans seriously adhere to the tradition of looking fellow drinkers in the eye when they cheer. And wouldn’t you do the same, if you believed not making eye contact while ‘prosting’ would bring seven years of bad sex? Below you’ll find a list of German superstitions: things that bring bad luck!

1. Be Careful When Giving Gifts: Shoes and Knives are a No-Go!

Looking for a gift for your best friend? And he loves to cook? If the friendship means something to you, forget giving him the sharpest kitchen tool: According to German superstitions, the knife is believed to cut the ties of friendship when gifted. Also watch out when it comes to gifting shoes. If you give your lover a pair of shoes, it’s your own fault when she runs away in them!

2. Watch out for Ladders!

Walking under a leaning ladder is tempting fate. At least, this is one of the common superstitions in Germany. Some background: Together, a wall, ladder, and the ground create a triangle. The triangle is a holy shape. Whoever walks under a ladder damages the holy area, inviting evil in his life – according to one of the many German superstitions.

Germans love to cheers. Often they don’t just clink glasses once in an evening, but every time a new round is ordered. Very important: Always look the person you are ‘prosting’ with in the eye. Whoever forgets to do this, so the superstition goes, will be cursed with seven years of bad sex. The Germans are half-joking when they uphold this superstition, yet they still are afraid it could hold some truth.

Every time someone lights a cigarette with a candle, a sailor dies. At least that’s how the superstition goes in Germany. Where does this idea come from? In the past, sailors produced matches when they weren’t fishing. They later sold these matches in order to increase their meagre incomes. Whoever saves money on matches by using a candle flame to light a cigarette is thus partly responsible for the starving of a sailor. Even though many say they don’t really believe in this superstition, many smokers knock three times on wood when they use a candle to light up. This apparently cancels out the bad luck, saving the sailor. Yet another superstition!

5. Open your umbrella outside!

During a downpour, most people prefer to walk under an umbrella. But don’t open that umbrella until you are outside–whoever opens an umbrella inside, or brings an open umbrella indoors, ensures conflict with their friends or partner.

Shards of glass are said to bring luck, but not if they come from a broken mirror. Whoever breaks a mirror has seven years of bad luck ahead of them. A reflection represents the soul of whoever’s image is being reflected–when the mirror breaks, so does the soul of the person reflected. The soul takes seven years to heal, or so goes this German superstition.

7. Black cats…approaching from the left?

A black cat means bad luck…and if the cat is approaching form the left, watch out! In the middle ages cats represented evil, as they were associated with wizardry and witches. Black cats were considered especially bad as black was thought of as the “demonic colour”. In the middle ages, left was considered the evil side. A black cat thus means even more bad luck when it comes from the left side. By the way: Left-side bad luck doesn’t end with cats. When you get up in the morning, if your left foot is the first foot that hits the ground, you will have an unlucky day.

Whoever wishes someone a happy birthday before it is actually their big day, brings bad luck to the ‘Geburtstagskind’. The earliest someone can wish you a happy birthday is when the clock strikes midnight on your big day. Background: Nobody knows what might happen before a particular point in time (such as a birthday), so it is unwise to invite bad luck by assuming events will take place before they really do. Also related to this is the German phrase, “Nobody should praise the day before the evening”.

9. Oops! Tripping on something in German Superstitions

Uh-oh, did you trip on something? Are you embarrassed? Forget about your shame for a moment. First you need to go back to the place where you tripped and step over it again. This will stop bad luck from coming to you, at least according to one of the German superstitions.

10. Don’t play around with salt

There are many German superstitions surrounding salt – one of these is that salt has the power to bring good luck. Thus it is a custom to give salt – together with bread – to someone when they move into a new home. But salt can also bring bad luck: Whoever spills salt is in for seven years of bad luck. This superstition probably arose from a time when salt was considered precious, even sacred. No wonder spilling it is a bad omen!

Also in our blog: We have this blog post also in German Language. Click here if you want to improve your language skills and read about German superstitions in German Language. Also intersting: We find ourselves now in the middle of winter – a season which means cold temperatures, runny noses, and snowy streets, especially in Germany. But Germans can be heard saying a lot of winter-related phrases regardless of the season. 7 German idioms, which refer to the cold but have nothing to do with the winter.