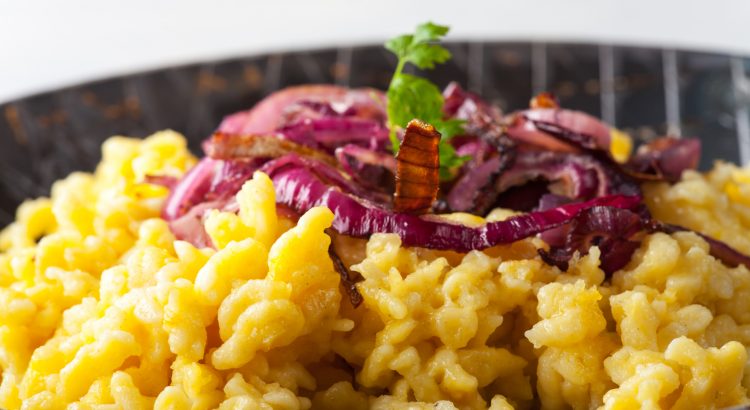 Winters in Germany are generally harsh, but this grey season isn’t all bad – winters mean great German food! In this Guest Post we hear from Christie Dietz, a food & culinary travel writer who explores regional German cuisine and culinary travel in her blog A Sausage Has Two. Here she shares with you the best German dishes for the cold season in Germany.

Winter in Germany is not, contrary to the hundreds of dreamy white winterscapes you may have scrolled through on Instagram, the crisp, snowy wonderland you might expect. Across many of Germany’s 16 federal states, the weather for the best part of half of the year is grey, miserable and rather depressing, and by the time the first tiny green buds appear on branches and patches of blue brighten the sky, we’re all bursting to get out into the sunshine.

Which is your favourite German dish? Let us know! Leave a comment below.

Luckily, the Germans are very well equipped for sustaining themselves during the winter months, snow-filled or otherwise. Historically, they’ve survived terrible hard winters on little more than turnips, but the country today is most well known for its German dishes: generous portions of meat and potatoes (mostly the Bavarian ones). Yet, pork knuckle with dumplings and Sauerkraut is just the tip of Germany’s culinary iceberg, and with a heavy reliance on seasonal, regional produce, there are plenty more winter dishes than that for sustaining yourself with German food on a cold dark night.

On the most simple and comforting level are those German dishes eaten out of a bowl, with a spoon: those ribsticking German soups and stews. Gulasch is perhaps the best known of these, a Central European staple incorporating chunks of pork or beef and various vegetables, flavoured with paprika, and served with egg noodles or bread. Then there’s Kartoffelsuppe (potato soup), a German food much greater than the sum of its parts, thick and hearty, full of winter roots and tubers, and garnished with Wiener sausages; and dried pea soup, featuring bacon or sausage again, and enjoyed with slices of dark bread. Lentil stew is another firm favourite, a warming combination of lentils, chopped winter veg, chunks of bacon and, once again, those Wienerwürstchen. At the other end of the scale – lighter and often vegetarian – Flädlesuppe is a clear broth with coils of sliced savoury pancakes thrown in shortly before being served.

When it comes to those large plates of meat like the world-famous Bavarian crackling-covered pork knuckle, cured pork cutlets (Frankfurter Rippchen) served with mashed potatoes and Sauerkraut is one of the popular German dishes in the Frankfurt area; up north, fatty pork and beef sausages called Pinkel are eaten with Grünkohl, or kale stew. Game is also very popular  German food during the winter months, with venison and wild boar appearing on traditional menus up and down the country in the form of sausages, braises, roasts or stews.

From this short list alone, it’s clear why the Germans are widely considered a nation of meat lovers, but though it’s certainly more difficult to order meat-free German dishes from a very traditional German menu, vegetarians won’t go hungry here during winter either. The southern German variation on a macaroni cheese theme, Käsespätzle – bouncy egg noodles and melted Emmental cheese topped with fried onions – is probably the best-loved vegetarian German food. But there are also plenty of seasonal winter soups to choose from, or, for example, bread dumplings with wild mushrooms in a cream sauce, or Schupfnudeln – finger-shaped potato dumplings – with Sauerkraut stewed with apple and onions. Kartoffelpuffer (potato pancakes), known by a plethora of different regional names, are particularly popular at Christmas markets, and depending where in the country you are, you’ll find them served sweet with apple sauce or jam, or savoury with Sauerkraut or vegetables.

Do you know any other German vegetarian dishes? Share your favorite German recipe with us in the comment section!

If none of these German dishes sound particularly refined, well, they’re not. German winter food is about sustaining yourself, about comfort and warmth and flavour, and whether you order a vegetarian broth or a bowl of stewed meat, it’ll deliver on all three fronts. And who cares if it’s snowing outside or not when there’s a steaming pot of lentil stew on the stove?

Did we miss something? Tell us which great German winter dishes should be added to this list! We look forward to your comment!

Christie Dietz is a food and travel writer originally from London but settled in Wiesbaden, Germany, since 2010. She writes about regional German cuisine and culinary travel at A Sausage Has Two. Her freelance work has been published in The Guardian and Fodor’s, and she has been featured in some of Germany’s best-selling news publications, including Die Welt and Stern magazine. You can follow Christie on Twitter and Instagram and Facebook.

One thought to “German Food: The best German dishes for the cold season in Germany”