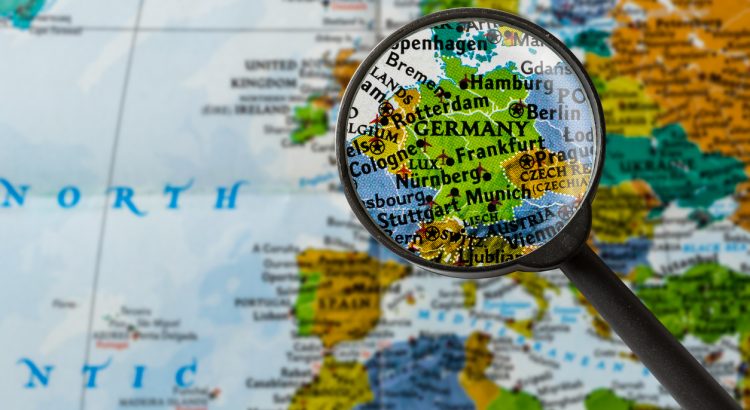 People who want to live and work in Germany have to deal with many challenges: The German language, mentally preparing for a different culture and work environment, managing bureaucratic procedures concerning visas and work permits, and the long to-do list after arriving in Germany. That’s tough and can hardly be done without help and plenty of research. Our series „Prepping for life & work in Germany“ will introduce websites to you that help you prepare for and start your life in Germany!

In our last post of this series, you learned about the website The German Way & More Language and Culture in Austria, Germany and Switzerland. Today we introduce the website 40% German and its author to you. In our interview, English and intercultural trainer Nic Houghton (33) from Newcastle upon Tyne, UK, tells us why he started the blog, how its blog got its name and what he finds quirky about Germany.

Employland: Can you tell us your German love story? What drew you to Germany? When and why did you come here? Give us all of it!

Nic Houghton: Funnily enough, my decision to move to Germany really was a love story (I guess it still is, but you might have to ask my wife!). I met my wife in the first few months of university in 2007. As luck would have it, she lived in the flat above mine, although I was sure I had no chance with the amazing German girl upstairs. This was mainly based on my brother’s assessment; after pointing her out and mentioning that I really liked her, he looked at her, looked at me and simply said, “You have no chance.” Thankfully, he was wrong on that point.

I decided to just do it, packed my 28 years of life in the UK into five depressingly small boxes and left

We stayed together for four years while I finished university in the UK and she finished studying in Germany, spending at least one hour a day talking over Skype. When I finished my post-grad in 2011, I realised that I would have to move to another city to find work. One of my lecturers asked me, “Why don’t you just move to Germany?” and up until that point I honestly hadn’t seriously thought about it. I decided to just do it, packed my 28 years of life in the UK into five depressingly small boxes and left. I really didn’t think about the decision too much, but in hindsight it was the best decision I have ever made. We originally planned to live in Augsburg, but my wife was training to be a teacher and we were sent to Nürnberg, which is where we are now.

Employland: So, then you started a blog? Are you the only one who runs it or who else is behind the scenes?

Nic Houghton: We have had a couple of excellent guest posts, but on the whole, it is just me working on the blog. I actually began blogging as soon as I arrived in Germany, but I stopped after a few years, partly out of frustration with maintaining a regular output and partly because I lost interest. I restarted the blog and set up my own website a year ago and have been writing regularly ever since.

Employland: And what’s the mission behind your blog? In what way is 40% German helpful for expats?

Nic Houghton: I’m not sure if I have any particular mission, although it is important for me to have some form of creative output in my life. There are some amazing blogs out there that look at the practicalities of life in Germany or how-to guides on moving and living in Germany, so I knew that another similar project would just be repeating what better bloggers have already said.

If I have any aim at all it is to unpack the clichés and stereotypes of Germany and the UK and to look at whether there is any truth in them. I also wanted to write about the small things that people, both German and British, miss about their respective countries. I love taking small details and trying to write about them and when possible, bring in the larger context. Every day, I see misunderstandings between different cultures, often because of really obvious little cultural points that once understood, can lead people to better relationships at work and in private. That’s what I hope the blog promotes. There are cultural differences which we misunderstand, but what we often do is judge them through the lens of our own culture and make poor conclusions for why misunderstandings happen.
Additionally, I like to link the cultural observations to things that are happening in politics or current events. I even try to look at the wider history of Germany and trace how the culture has developed over time.
I think I am quite well-placed to comment, which is where the name of the blog came from. After a while, expats in any country begin to take on aspects of their adopted culture, but also retain important parts of their home cultures. We see things differently, which can be interesting, funny and slightly depressing, often at the same time.

Employland: Why the name 40% German? Do you feel you’ve become almost half German?

Nic Houghton: I realised during a trip back to the UK, that I was actually becoming more German. I had an argument with my brother about what constitutes a “pinch of salt”. I said it would be more helpful if he just gave me a measurement, to which he replied “What are you, a robot?”. I realised then that my German life was surrounded by exactness; in speech, scheduling and more importantly in food preparation. Germans have this amazing super power in that they can be really precise and unflinchingly honest, something the British frequently avoid. When someone in the UK says they “tell it like it is” it usually means they are simply rude and obnoxious, whereas in Germany it is just part of the social norm. I am trying to master those skills, but it is a work in progress. A rough estimate is thus 40% German.

The centrality of Germany is one of my favourite things. I remember the first time I saw a sign post for Prague (which is only 3 hours away) and I realised I could just go there for the weekend

Nic Houghton: I always feel a little uncomfortable with questions like these, because if you say how great life is it sounds like boasting. For those taking note, that is the 60% British egalitarian part of me. The honesty is great, there is very little conversational fluffing required and opinions can generally be offered without too much fallout. It is a tremendously active country, with a culture of clubs for all manner of sports and hobbies, which means that there is always something to get your teeth into.
The centrality of Germany is one of my favourite things. I remember the first time I saw a sign post for Prague (which is only 3 hours away) and I realised I could just go there for the weekend. Living on an island, the idea of going to Prague or Paris or Rome seems like such a vast journey. In Germany, I can just get in a car and in a few hours I can be in these amazing locations.

Employland: Moment of truth: What do you find quirky about Germany, or what was hard to get used to?

Nic Houghton: Living in a different country heightens a person’s sensitivity to lots of different things. For instance, in the first few years I found it hard to categorize my wife’s actions as typically German or typically female. In turn, she finds is hard to gauge whether I am simply being really British about things or was just being your basic common or garden man-child. I don’t like that I can’t find a decent session beer (a beer that can be drunk all day, without a person ending up terribly drunk). When I tell my German friends this they think I have gone temporarily insane.
This speaks to something about German culture, at least in the South of Germany, which looks for past precedents and makes decisions based on that. It can be hard to get new ideas or new ways of doing things introduced, especially if they are untested. Risk-taking is frequently frowned upon, which can really limit what can be achieved.

Employland: What do you miss most about the UK?

Nic Houghton: Not a lot, especially since the referendum. I miss my family, obviously and my friends, but if you have decided to move to another country, I think it is important not to spend time dwelling on the things that we miss. Most things can be replaced in one way or another. Plus, I like going back to the UK and getting my hands on a sausage roll or a bacon sandwich.
I do miss the Geordies though, there is something about Newcastle and the people that I haven’t really found an equivalent for, yet. The friendly nature of the North East of England and the importance placed on people having “good crack” (ability to engage in enjoyable conversation) is something I do miss.

Employland: Last but not least: Can you give three tips for expats who plan to move to Germany? What advice do you have for them?

Nic Houghton: I think learning German is really important, I am terrible at it, but I think people have to try and get the hang of it and also be brave enough to repeatedly fail at it. However, I imagine everyone will
say that, so here are three other things to think about.

Interested in more?
Read other interviews from this series with James Meads about his blog LiveWorkGermany or with Hyde Filipo about the website The German Way & More Language and Culture in Austria, Germany and Switzerland.

Also in our blog: Your hard work paid off? You landed the interview, impressed the employer, and now have been offered a job in Germany. The only thing separating you from your new desk? The employment contract. We give you an overview of a German contract and what to look out for before you sign. Or would you rather learn about expat experiences? Naked greetings in the sauna, a bakery on every corner, and – ha – German buses do run late! Megan Lester, a 23-year-old from Portland, Oregon (USA), shares her experiences from spending the past 7 months as an English teaching assistant with the Fulbright program in Germany.