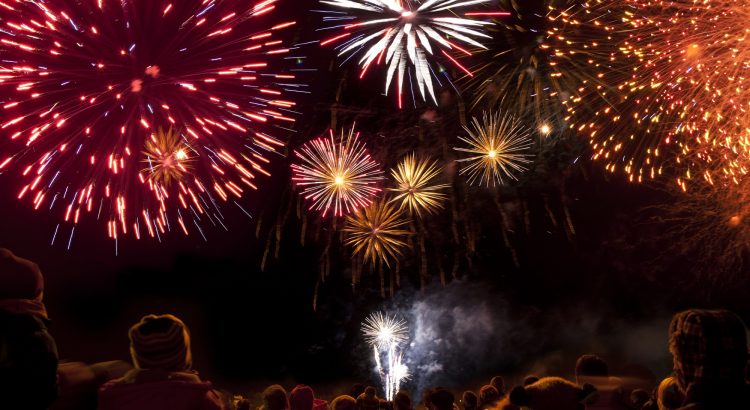 Christmas has come and gone in Germany. The German Christmas markets are closing their doors, the smell of Glühwein is fading form the air, and that means the New Year is nearly upon us! Around the world, a New Year’s Eve means a new beginning, a time to make new resolutions, to look ahead and think about how we could improve. But how do the Germans, in particular, celebrate the New Year?
In this guest post, Hor (28) from Spain, main blogger at myexpatworld.com shares how to celebrate the New Year in German style, and contrasts it with traditions in her home country of Spain.

The last day of the year, known in Germany as Silvester, is traditionally full of activities. On New Year’s Eve, people mostly spend the day playing games with their family, attending mass and eating Berliner doughnuts, a German pastry made of fried sweet yeast dough and filled with jam. A really special tradition is to watch the popular British sketch show “Dinner for one”. This television show has been shown each year since 1963 on German television. Did you know that it is not even a popular show in its home country?

To enjoy the evening and to start the New Year off right, Germans like to drink some Feuerzangenbowle before attending any New Year’s Eve festivities. The popularity of this flaming punch, made with red wine, rum and caramelized sugar, was boosted by the classic novel of the same name and the 1944 film version.
However, before starting a new year we have to leave an old one behind, right? Germans like to spend the last night of the year surrounded by close friends. Gathering together with loved ones to eat and drink is a fundamental aspect of this night of the year.

At midnight, loud displays of fireworks invade every single city and village of Germany

Traditionally, Silvester is meant to be an occasion to organize some soirée at home and to invite some friends to enjoy a homemade meal, often in the form of a buffet. The traditional New Year’s Eve German menu consists of homemade marinated herrings, potato salad, raclette and fondue, accompanied with sekt (sparkling wine) and champagne. At midnight, loud displays of fireworks invade every single city and village of Germany. These awesome, colorful fireworks mean that a New Year is about to start. It is then the perfect time to kiss, embrace and wish each other good luck and many blessings for the upcoming year.

After midnight, the first important German tradition on New Year’s Eve is Bleigießen, which is when you heat some lead and pour the melted content into cold water. The form created by the metal indicates what might happen in the New Year. For example, if the lead forms a ball, it means luck. Germans are so rooted in this tradition kits are sold to help identify and interpret different shapes.
Germans spend the last night of the year surrounded by close friends, whereas we Spaniards prefer to enjoy a nice dinner with our relatives before going out to celebrate with friends. But let’s go step by step.

As you might expect, we love to spend the last day of the year enjoying traditional wine and tapas with our friends and family. We tend to go from bar to bar until late afternoon, when we go home to get ready for dinnertime. Something you should take into account if you want to celebrate New Year´s Eve in Spain: wear something red. We Spaniards believe that wearing something red colored will bring us luck in the upcoming year.

Unlike Germans, there is a deep-rooted New Year’s tradition that every single Spanish person has to fulfill at midnight

At night we get together with our relatives and share traditional food such as lamb, hake, cold meat, seafood and turrón (a sweet treat made from a mixture of honey, eggs, sugar and almonds). As a traditional, wine growers’ country, we love to accompany our meal with red and white wine (depending on the dish we are about to enjoy).
Unlike Germans, there is a deep-rooted New Year’s tradition that every single Spanish person has to fulfill at midnight. Of course we also enjoy impressive fireworks at midnight, but before this explosion of color we need to do something really important if we want to start the New Year off right.

Have you ever heard about the 12 Lucky Grapes? Let me explain more about how this ancient tradition works.
Back in the late 1800s, Spanish families used to eat grapes and drink champagne on New Year’s Eve to celebrate the New Year. According to tradition, it is believed that Spaniards used to eat 12 grapes as the bells chimed (one grape for each chime) to attract good luck for the upcoming year. Years later, some citizens of Madrid (the current capital of Spain) gathered at Puerta del Sol square to eat their grapes, this is what led to our modern day celebrations.

Thousands of people meet every year at the Puerta del Sol square to celebrate the New Year, eating the 12 grapes, singing and drinking champagne. However, this New Year’s Eve tradition has since expanded to every Spanish city, which is why every main square host thousands of people ready to welcome in the new year. For those who prefer to stay at home, all television channels send their most important hosts to Puerta del Sol to broadcast live the 12 bell chimes (yes, hosts also have to eat the 12 grapes in front of the cameras).
After finishing our grapes we celebrate with fireworks, kissing our loved ones and drinking champagne. Mostly, young people also get ready to get together with their friends and to start the party in some club until sunrise.

Unlike in Spain, Germans like to spend the first day of the year chilling out and recharging before returning to the office. In most cases, the first of January is a day to travel back home and clean up Christmas decorations.
In Europe’s other corner, Spaniards still have many events ahead before the Christmas season comes to an end. The first one is the traditional New Year’s lunch. Yes, we love spending the first day of the year sitting around the table enjoying tasty traditional food with our relatives. This day we serve mostly lamb, cold meat, soup and, of course, turrón accompanied with a cup of coffee. Usually, this meal stretches on until late evening, when people leave the host’s home and return to their homes to chill out and watch some movies.

In contrast to Germans, most of the people do not start working the second of January but the day after the Three Wise Kings (6th of January) come to visit us. Until then, people tend to spend time with their loved ones, to gather with different groups of friends, to buy presents and to enjoy the holidays.
Although New Year’s Eve traditions are quite different among the countries, we all share the same spirit; gathering with our loved ones, wishing our friends and family many blessings for the upcoming year and sharing our time with those who are important for us. The New Year is always a nice time to make resolutions, to try to improve and to be grateful for all we have been blessed with. Happy New Year 2018! May all your wishes come true!

About the author:
Hor (28) from Bilbao, Spain is an International Online Marketing Manager, who came to Germany four years ago. Planning to stay only a couple of months, she then fell in love with her new hometown Dusseldorf in North Rhine-Westphalia and is still living there happily.

Also in our blog:
Kalima was born and raised in Kazakhstan and earned her law degree in China, but she left all of that behind her when she married her German husband and moved to Hamburg. She shares her findings about typical German life in comparison to life in Kazakhstan with us.
Also interesting: It has been 11 years since Shyam Machiraju left India to pursue a Masters in Germany. Today he plays an important role as engineer and project manager in an international company: He not only serves as an engineering specialist for the company, but also as a culture-mediator: An Indian engineer in Germany – Being a specialist and culture-mediator.