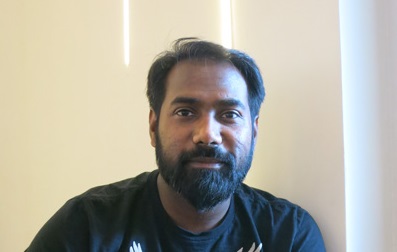 An Indian engineer who has been living in Germany for 11 years sat down with Employland for an interview.

It has been 11 years since Shyam Machiraju left India to pursue a Masters in Germany. Today he plays an important role as engineer and project manager in an international company: He not only serves as an engineering specialist for the company, but also as a culture-mediator.

As soon as Machiraju completed his Bachelors in India (and also learned German at the Goethe-Zentrum Hyderabad), he moved to Hamburg. His goal was to get his Masters in mechanical engineering. After his studies, he started working in a company in the aircraft industry and is still employed there today. The company has branch offices worldwide, from North America to Europe to Asia, and a very important office in Machiraju’s home country, India. Machiraju is responsible for the company’s projects in India, which is a clear advantage for his employer: “There are great cultural differences [between Germany and India]. There is no guarantee that an Indian or a Chinese colleague will get along with his German colleague,“ Machiraju explained.

Machiraju scores through his intercultural understanding and knowledge. “If you ask a yes-/no-question in Germany regarding something that is not possible, then you will get a clear ‘no’. But if the answer to a question or request is ‘yes’, then steps will be taken to fully implement that request, or to fully realize your idea. India has an intensely polite culture, meaning Indians very rarely say ‘no’. Instead, India has a big “Yes-but-culture”. You say ‘yes‘ und implicitly there is a ‘but‘ with a long list of criteria attached to it. The ‘yes’ is only valid if all these given conditions (or ‘buts’) are fulfilled. I am trying to teach my Indian colleagues to clearly say ‘yes’ or ‘no’– instead of ‘yes’ when it really means ‘yes, but only if x, y, z’.

The cultural learning process takes place on both sides: The German employer is also challenged to show more sensitivity toward cultural differences. In India, people are very cautious when it comes to criticism, which means German directness could easily be misunderstood. Machiraju illustrated: “You cannot say: ‘What you did is wrong, do it again!’ It is very, very important to provide constructive feedback. If not, my Indian colleagues will immediately switch into defensive mode.”

Due to their global presence, the aircraft company’s team in Hamburg is international. Spanish, French, Indian, and Chinese workers all strengthen the company. In order to be globally competitive, it is necessary for German companies to build up teams with international professionals who know and understand their home markets.

And there’s another advantage in having an international team: It makes the job-search for additional qualified personnel easy.

Although the company also advertises on international job websites, many new employees get hired through being referred by an existing employee: “I spread the word in my Indian network. I let my network know that we are in search of a new candidate. If there is someone who matches the job profile, we invite him for an interview. If he then seems like a good fit, we hire him.”

It is important that international colleagues feel at home, something Machiraju knows and has experienced himself. In order to have an effective and efficient start in a new country, the company supports employees when it comes to official bureaucratic procedures – from registering for health insurance to getting a residence permit. The company informed Machiraju which documents are necessary for employment, as well as the responsible authorities for each step of registration. Even if a company offers accommodation in a hotel until new colleagues find an apartment, the lodging is often unnecessary. “The company had a lot of Indian colleagues. When a new employee comes from India, he calls in and asks: ‘Can you pick me up from the airport; can I stay with you for a few days until I find a home?’ That’s pretty normal among Indians.” At Machiraju’s work there is even a mentoring system. A mentor will instruct new employees and help explain any points of confusion they might have.

Blue Card instead of Greencard

The international employees in Machiraju’s company come to Germany via Blue Card. With this card, Machiraju explains, “They obtain the residence- and work permit for the duration of their employment contract.” Machiraju himself still stays in Germany with the Blue Card: “The mayor’s office has sent me a letter for four years saying I should become naturalized. But that would mean I would have to give up my Indian passport. And I still don’t want this.“

Also on our blog: Living the Indian way in Eastern Germany – Dinesh Kumar Kodavali from India shares his experiences of living and studying Engineering in Magdeburg. Or read what a Spanish Engineer thinks about the Germans. Also interesting: Naked greetings in the sauna, a bakery on every corner, and – ha – German buses do run late: Read about Megan Lesters other experiences in Germany in a previous Employland-interview. Want to know what an engineer in Germany earns? Read here.