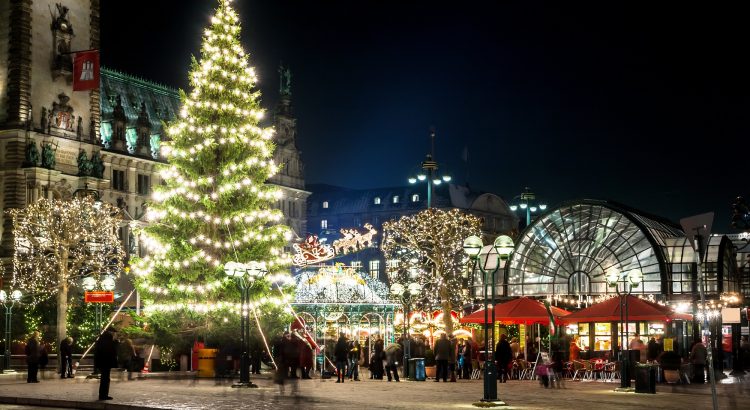 The delicious scents of roasting chestnuts, mulled wine spiced with cinnamon, and wintery pastries slowly fill the streets of cities across the country – it must be Christmas in Germany! Shortly before December begins, the German Christmas season starts up with, festivals and other traditions, but most importantly, special German Christmas dishes, treats, and drinks that make it a truly magical time of the year.

In this Guest Post, Tom Scriba, an American expat in Germany and author of the website abraodamerican.com, shares how Christmas in Germany looks, feels and tastes!

Food and Drink during Christmas in Germany

My absolute favorite thing about Christmas in Germany has to be Glühwein (mulled wine). This hot spiced wine, traditionally red but also in white, is sure to warm your body and soul even in the deepest depths of gray German winters. Glühwein is served everywhere, from bars and restaurants to the famous Christmas markets that spring up in every town and city in early winter. It is remarkably easy to make on your own as well, just be sure to have a dry red wine and all the traditional winter spices on hand (oranges, star anise, cinnamon, nutmeg, etc.). There are thousands of recipes online, so find which you like best and make it if you’re not in an area with mulled wine available. Zum Wohl!

As you wander the central streets of Munich, Berlin, or any other German city’s Christmas market, one of the most recognizable and enticing smells will be that of roasted chestnuts (Heiße Maroni). You know, with all the love in the US for “chestnuts roasting over an open fire”, I don’t think I ever ate one back home. Here in Germany though, they are very much available and a major part of what makes Christmas time special. Also, roasted, spiced, or sugared almonds and other kinds of nuts are quite prevalent in city squares across the country at this time.

Much like the turkey at American Thanksgiving, for many Germans a roast Christmas goose or duck is center stage on December 25th. Again, wintery spices and flavors are common here with citrus being a common theme. Just thinking and writing about it now has my mouth watering for a juicy Christmas goose. I think I’ll have to cook one this year!

That delicious main dish is often paired with one of the most traditionally German side dishes, red cabbage (Rotkohl). Cabbage braised with onion, apple, and spices is a beautiful pairing for any dish, but I think it matches exceptionally to any wintery main dish like goose, duck, or roast pork. Red cabbage is especially easy to cook compared to regular cabbage (Weißkohl) so I suggest starting with to anyone cooking their own.

Christmas in Germany also means special wintery desserts. German Gingerbread (Lebkuchen) is an absolute staple of the season and is a must-try during the Weihnachtszeit (Christmastime). Originally from Franken, the northern part of the state of Bavaria, Lebkuchen comes in many forms and styles. Some come with chocolate, some come in the form of hearts (like those at Oktoberfest), many have icing, and most are spiced with wonderfully wintery spices like cinnamon, star anise, coriander, ginger, cardamom, allspice and a variety of nuts and dried fruits. Another delicious German Christmas treat is Spekulatius, which is a sort of spiced shortbread cookie. They are quite commonly shaped into rectangular-ish shapes, like a ship, house, or even a windmill (though admittedly those are probably Dutch versions…).

Finally, marzipan, a form of cheese that is traditionally proudly produced in the city of Lübeck, plays a major role in many seasonal desserts. There’s even a special “Glücksschwein” (lucky pig) made of marzipan that is common during both Christmas and Easter.

In Germany, both the 25th (Weihnachtstag) and the 26th (Zweiter Weihnachtsfeiertag) of December are public holidays across Germany. Most shops and stores are closed both days, and probably many restaurants and bars, so expect to spend the time in the house, with family, likely eating until you explode. It seems like Christmas Eve, or Heiligerabend (literally holy evening), is turning into a sort-of half-holiday as well with many people taking the day off or at least half off.

Christmas parties with the office or the company seem to be quite common as well, likely with that oh-so-delicious Glühwein being served up. Get ready to see a different side of your coworkers, if you haven’t interacted with them outside the office. In my experience, once the work day is done and Feierabend begins, formal work behavior seems to give way to a much more open and social atmosphere. The good cheer and cozy Christmas feeling of the season certainly makes it easier to unwind as well.

Other Christmas Traditions in Germany

Christmas in Germany doesn’t just mean work parties and special seasonal treats, there are several other traditions that are celebrated throughout the country at this time of year as well.

Two little traditions that apply to the run up to Christmas in Germany are the advent calendar (Adventskalendar) and the advent wreath (Adventskranz). The advent calendar certainly isn’t unique to the German culture, but you can bet that German kids (and chocolate-loving adults) are just as excited to open that little window and get their treat as anyone else! The advent wreath in Germany is a ring of pine branches and other decorations with four candles placed around it, one for each of the weeks leading up the Christmas. These advent wreaths are also well-known in other cultures.

Just as I did as a kid, children in many German homes will be cleaning a pair of boots and placing it in front of their doors on the evening of December 5th. On the next morning, they are greeted with sweets and little gifts in their boots that good jolly ol’ St. Nick left their overnight for their good behavior.

Of course, one big aspect of the season is Christmas trees – a tradition in Germany that dates back as far as the mid-16th century. Today, many houses will have their own tree inside, decorated with lights, ornaments, garland, and other seasonal decorations. However, the most important Christmas trees have to be those that stand tall in main squares of cities across the country. In Munich, the star of the show is the tree standing in Marienplatz. These are often massive fir trees nearing 100 ft. tall and for the last 40 years or the city has received them as a donation from a town in the Bavarian countryside. Seeing these behemoths lit up and glistening in the crisp winter air is truly something special.

Finally, the most important German tradition of the season are the Christmas Markets in Germany. This is where all those delicious smells filling the city streets emanate from. And, in Munich the main Christmas market surrounds the magnificent Christmas tree in Marienplatz. Besides stands for Glühwein, roast chestnuts, and other treats, there are stands for trinkets, toys, gifts, local crafts and even specialty produce and foodstuffs. Christmas markets (Weihnachtsmarkt or Christkindlmarkt) are ubiquitous in Germany, popping up in towns and cities about four weeks before the holiday. In my humble non-German opinion, Christmas markets are truly the best part of Christmas in Germany. They are a physical embodiment of the wonderfully warm, open, cheery, and even “gemütlich” atmosphere that seems to come in to fight the cold weather.

Whether you’ve moved to Germany for work, or you’re simply visiting, being here during the Christmas season is a special experience. Enjoy the tasty treats, time off work, and delicious Glühwein at your local Christmas market. Remember to take a second to be happy and thankful for this magical time of year.

Also in our blog: Naked greetings in the sauna, a bakery on every corner, and – ha – German buses do run late! Megan Lester from Portland, Oregon (USA), shares her experiences from spending her time as an English teaching assistant in Germany.